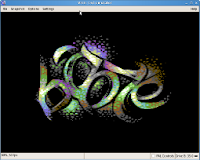 A new version of Vice - popular C64 emulator - has been released on Dec 19th 2008. This version brings some small improvements - most notably fullscreen mode finally works and uses xrandr! This means much more fun & immersion when watching old C64 demos :).

This brings me to a bunch of new demos released in 2008. It turns out there are still guys out there who can amaze the world by squeezing last bits out of C64... If you had C64 and you've ever felt a bit nostalgic about it, I suggest you install vice and watch these demos:Going back to 2007... Check out "Desert Dream" demo by Chorus & Resource - these guys made an excellent remake of the popular Kefrens' demo from Amiga. Simply amazing.

BTW... A nice video about C64 internals and capabilities has been recently made available - see here.
at 12:14 PM