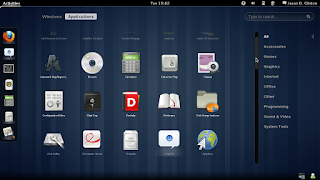 The GNOME project has just released GNOME 3 - a major overhaul of this popular desktop environment - which promises a new, beautiful and improved interface and a shift in the way users access their desktop. I've been using GNOME 2.x for a few years already and had really high hopes about the upcoming release. Unfortunately, all I got is a big letdown.

The key features I loved about GNOME 2 were its simplicity, configurability, extensibility and stability. This is no longer the case with new GNOME. GNOME developers did what KDE developers did a few years ago, by replacing KDE 3.5  with KDE 4.0: they have rewritten their desktop and dropped tons of features to provide "new desktop experience". I don't mind GNOME Shell - in fact I find some of its aspects quite appealing - I just miss the freedom and flexibility of GNOME 2. In GNOME 3 configurable panels are gone, existing panel applets are gone (well, most of them - all the bonobo-based), apperance settings are gone, gdm settings are not configurable (GDM setup tool had been removed a long time ago, around gnome 2.28 and it is still not available).  Not to mention that GNOME 3.0 in its current shape is not really stable and I found some irritating bugs in Gnome Shell after using it just for around one hour.


Some of the missing features will probably be provided by 3rd party tools that I'm sure will fill the vacuum sooner or later, but I'm afraid that reaching the functionality and stability offered by GNOME 2 may need a few development cycles. This makes me a little bit concerned about the state of Linux desktop in the next 1-2 years: with immature GNOME 3 and Ubuntu/Unity abandoning GNOME, the only viable option is to stick with a distribution that still supports GNOME 2, or move to XFCE. The current state of affairs may be a big chance for the latter, by the way.u

After testing GNOME 3 & XFCE 4.8 in Arch Linux for a few days, I've sadly decided to abandon Arch Linux... The disadvantage of running a rolling distro is that updates such as GNOME 3 are just rolled out and you either accept it or refuse them (and stop getting security updates at the same time)... And for all these reasons I decided to move to  Debian 6.0 (Squeeze) and stick with it for a while... Let's see how GNOME 3 and Unity develop. Maybe by the time of next Debian stable GNOME 3 becomes really usable?
at 7:12 AM No comments: 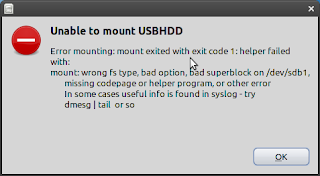 If you happened to experience issues with auto-mounting of USB hard disks in Debian 6.0, like the one on the attached screenshot, then read on as this is very easy to fix. The problem is caused by an improper entry in /etc/fstab created by Debian installer: if you've installed Debian from a USB disk, then a "cdrom" entry pointing to that drive could have been created in fstab, e.g.

Just remove such entry and you're done! Note: I experienced this issue when installing Debian 6.0 iso. Chances are this issue was corrected by Debian 6.0.1a (or later) iso, but I haven't verified this.
at 6:38 AM 2 comments: