QComicBook was first released 5 years ago, on Jan 7th 2005. It took me just 2 or 3 weeks (around Christmas & New Year's Eve time in 2005) to complete the initial implementation, dubbed 0.1.0. The program soon became quite popular as it was probably the first comic book reader available for Linux. It had very good reception and I got a lot of positive feedback at that time. It was later packaged for many popular Linux distributions.

The program was usable from the very first release, of course with a limited set of features. More features were gradually added with new releases. With version 0.3.4 the set of features was kind of "stabilized";  this was November 2006.  Version 0.3.4 marks a stagnation period for QComicBook development: the next version (0.4.0) bringing the important Qt4 port was released one year later, on November 2007. But then nothing was happening again for almost two years - till August 2009 & version 0.4.1.  In 2009  QComicBook got my full attention again with four bugfix releases (0.4.1 - 0.4.4) and one "major"
release (0.5.0) which brought some new features. I'm now working on new exciting features, one of them being a ....let's keep it secret for a while ;) as it's still in early stages; keep an eye on this blog as I'll soon reveal some details...

Thanks to all of you who support QComicBook by using it, packaging it for your distro, sending me some good words, bug reports, fixes etc. QComicBook would not be here without your help! Cheers!
at 1:47 PM No comments:

Email ThisBlogThis!Share to TwitterShare to FacebookShare to Pinterest
Labels: qcomicbook 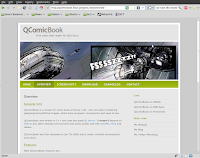 After a few weeks of downtime my website is finally back online with new address and design. After some searching for free web hosting I've eventually decided to buy a domain and use a paid web hosting which provides all the necessary tools (e.g. Ruby on Rails) to play with.

Both websites are still under construction, may contain some broken links or may experience occasional downtime
but are already usable.
at 2:34 PM No comments: