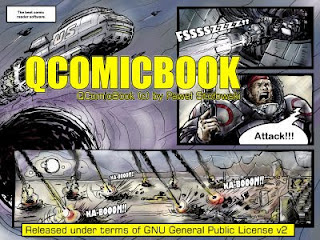 I'm happy to announce that the new version of QComicBook has finally been released and is available for download. The middle version number has been increased from "4" to "5", meaning this release brings substantial new features, not just bugfixes. Here is the ChangeLog:
The most important new feature is of course true continuous scrolling mode, which displays all pages on a single continuous "sheet of paper" that you can freely scroll up & down. I don't have to say that reading comic books this way is much more enjoyable, do I? Of course, the implementation is smart enough to preserve memory and load/release pages as needed, so no worries. This feature took me tens of hours and a lot of blood, sweat and tears to implement, so keep that in mind and consider a small donation (e.g. a beer worth) if you like QComicBook (PayPal link is available at my home site) ;).

To celebrate this new 0.5.0 release, QComicBook got a new splash screen (see picture above) - thanks again to Adam Mateja for this wonderful piece of work! 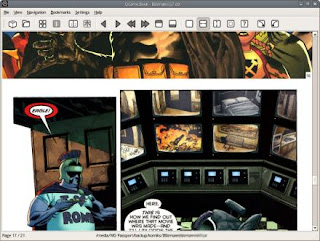 Now as 0.5.0 has been released and a few months of work has been concluded, I'm about to start planning for upcoming months.  As of now the following two features are on the top of my TODO list:
Of course, before these (and/or possibly other) features are implemented, expect 0.5.1 bugfix release.

Email ThisBlogThis!Share to TwitterShare to FacebookShare to Pinterest
Labels: qcomicbook

When half of your memory is gone

When you're compiling a custom kernel, don't forget to turn 'HIGHMEM' option ON, otherwise you may be wondering why only a part of your memory if available for use :}.... And don't let this option fool you, 4GB actually means systems with 1-4GBs... Fortunately, kernel messages are very accurate and pinpoint the problem:

I've just recently collected almost all of the singleplayer campaign trophies in Killzone 2, except for Heroic Survivor, Iconoclast and Field Agent. I'm now going to beat the game for the 3rd time, this time with "Elite" difficulty level to earn the remaining trophies. This will be tough time... Killzone 2 is the first game I've ever played which gets even more fun and enjoyable the next time you beat it. IMHO it is also the best first-person-shooter ever. Period.
at 12:06 PM 2 comments: